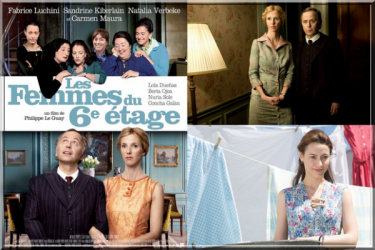 This romantic comedy, set in Paris 1960, stars Fabrice Luchini as Jean-Louis, a businessman who lives a bourgeois existence with his wife Suzanne, Sandrine Kiberlain, while their children are at boarding school.

Their world is turned upside-down when they hire a Spanish maid who introduces Jean-Louis to an alternative reality on the sixth floor servants’ quarter. The sassy Spanish maids are happy to be in France and not in Franco’s fascist Spain. They teach the businessman that there is more to life than stocks and bonds. This funny social satire is uplifting and enjoyable.

View the film on Amazon Prime or Apple TV ahead of the discussion.

The bilingual presentation and discussion will be led by Helene Laroche Davis. Friday September 24 at 6:00pm.