The Americans on the French Riviera 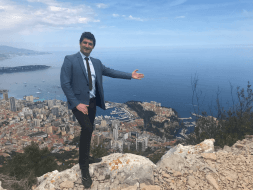 Explore the French Riviera in conversation with local resident and expert, Franck Balbi.

Learn why this stunning region attracted Thomas Jefferson and then later F. Scott Fitzgerald and Grace Kelly among others, becoming "the place to be" in the 1920s.

Franck, 54, was born in Orange, Vaucluse, in Provence. After growing up surrounded by Roman ruins, lavender fields and vineyards, at 15, Franck decided to join the National Conservatory of Dance and Music of Avignon. At 19, he joined the Monte Carlo Ballet company and started travelling the world, including the United States of America. He continued his career as a soloist dancer at the Berlin Ballet for 9 years before returning to Monte Carlo. After teaching for professional dance companies, schools and conservatories, he decided to face a new challenge and completed his other passion for History.

Franck has always been a big fan of the Hollywood golden age movies, and American culture in general. All about Franck’s life is sharing his passions with people around the World.